In this article I want to review my most current Deck that I am using in Rank Mode in Hearthstone. I am currently using a shaman for this and have been since last month. When playing rank mode I am only playing one class so I can hopefully get the golden hero for the shaman class. Currently I have 122 of the 500 wins and as you can see I have a ways to go and the deck I am currently using is a mechanical theme for the shaman. I got the idea from hearthpwn.com/ and below are screenshots of the cards I use. 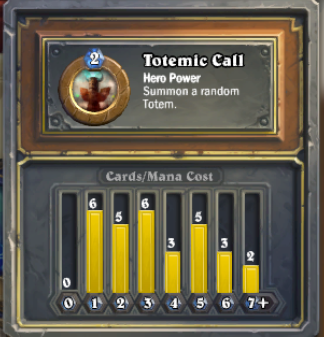 So everyone knows before we get too far I do not pretend to be verse into theory crafting but I am not unknowing either so take whatever I say here with a grain of salt.

I feel my curve is well suited for most decks I face and about the only time I have issues is when I go against agro decks and I don’t get cards for removal or low cost minions.

On my opening move I like to play Cogmaster and then Annoy-o-Tron on the second move so that the Cogmaster will have + 2 attack on his first turn to attack and some protection behind the taunt. I like to play power mace on turn three and hopefully by turn 4 I can use it for the second time so that the death rattle will give a random mech  + 2 + 2. If I do not a mech on the board I will wait to use the weapon unless I feel it is imperative to remove an enemy minion.

For mid- Game I like to use Bomb Lobber because his battle cry does 4 damage to a random enemy and it is especially useful when there is only one minion on the field. I have found that many times if I keep the board clear early game and I start using the bomb lobber my opponent will give up.. Other cards I use use mid-game for removal are Rock Bitter Weapon which gives a character + 3 attack for one turn and Fire Elemental which has a battle cry that does 3 damage to an enemy character.

Fire elemental along with Loatheb can be very useful as fodder for CC removal spells and in the late game Dr. Boom and Ragnaros are very useful to beat the enemy hero.

I have also added some card for crowd control or to bypass an enemy minions mechanic. These cards are Earth Shock, Hex and Lightning Storm. Lightning Storm is a card you may want to try to keep if you think you are running up against an agro deck such as zoolock or face hunter.

There are also some other cool things you can do with this deck such as having a Whirling Zap-o-Matic next to a  Flametongue Totem and applying 2 Rock Bitter weapons to the Whirling Zap-o-Matic. When you do this your Zap-o-Matic gets + 2 attack from the Flametongue Totem and + 6 attack from the Rock Bitter Weapons and on top of all that it has wind furry which allows it to attack twice so now he can do 11 attack per strike for 22 damage on one turn.

This entry was posted in Hearthstone. Bookmark the permalink.